Among the most exciting – and transformational – features of Baltimore Lab School are our Academic Clubs. In themed spaces designed to foster student engagement, students occupy the roles of historic cultural leaders as they create hands-on projects that bring a compelling past world to life. Through these daily sessions, students engage in project-based exploration of history, literature, geography, science, archeology, sociology, and visual and performing arts. Academic Clubs are fully aligned with MD State Social Studies standards for grades 1-6.

The dynamic, small-group setting assures that every Academic Club is socially rich and academically rewarding. Emphasis is placed on critical thinking and problem-solving. Discovery Club employs dramatization and the hands-on creation of art projects to interpret and experience the contributions to society made by conservationists and naturalists throughout history. By examining the efforts of historical and contemporary environmentalists using multi-sensory activities, critical thinking and socialization skills, six to seven year old students discuss, experiment with, learn and reinforce academic skills in science, social studies, math, geography, reading, and writing.

The club is centered around the idea that park rangers are stewards of our communities and that people throughout history and today work to protect our natural environments, animals, natural resources and personal connections to nature. This phase encompasses the study of historical figures like Teddy Roosevelt and John Muir; artists like John James, Audubon & Ansel Adams; and contemporary figures like Pete Seger, Jane Goodall, and Alice Waters.

Students will learn about their family, school, and community and how they can participate in environmental initiatives like recycling, raising awareness about endangered species, gardening, and conservation. Students will read biographies, write letters, estimate, measure, observe, collect, hike, sculpt, paint, make books, cook, garden, and teach others as they connect history to their own lives and discover our natural world.

Gods Club uses the arts to teach children about ancient Western civilization: Egypt, Greece, and Rome. The name “Gods Club” refers to the central importance of mythology, that is, polytheist religions, in the ancient world. Mythology provides a wealth of characters for club members to assume and makes study feel more like play.

The first trimester is spent in ancient Egypt. As the goddess Isis, the teacher involves students in activities that balance scientific, social, artistic, and mythical study. The Nile, represented on the floor in the middle of the room, places the classroom on a map of Egypt’s Old Kingdom of 3000 B.C. Tactile models, puppets and costumes introduce creation myths. As “gods,” students act out a mummification ritual with clay “bodies” and small plaster sarcophagi. The pyramid’s structure serves as architectural model and form with which to organize a social hierarchy of priests, government officials, nobility and peasants. Children accompany Egyptian music with rattles, drums and cymbals. At the end of the trimester, a feast of bread, honey and grapes is enjoyed.

Club members become Olympian gods as the map of Egypt turns into a Greek temple. A dramatic reading of the Odyssey introduces club members to the geography and spirit of ancient Greece. Daily physical exercise follows the opening ritual.

Students learn the importance of craft as they form golden death masks and clay amphorae and weave on wooden looms. They write a short original play and perform in papier mache masks, using handmade swords and shields. Making a tabletop Parthenon helps students remember architectural terms. The principle of democracy is introduced while the children cast votes on pottery shards.

Gods Club continues with immersion in the arts and sciences of ancient Rome. Reassigned Roman gods’ names, club members imagine the story of Romulus and Remus. Symbols of Roman wealth are represented with tile mosaics modeled after the pictures on floors found in Antioch. The “gods” use a level and clay arches to form a working model of an aqueduct. Small chariots race around in a game of Circus Maximus. Students take turns as emperors, citizens, senators and slaves. Decadence is celebrated with a Roman feast complete with slaves borrowed from another club. The temple becomes suddenly plain in our final days of the year, as the relatively somber tone of monotheism gains great influence. What joys and sorrows will the Jews and Christians bring? 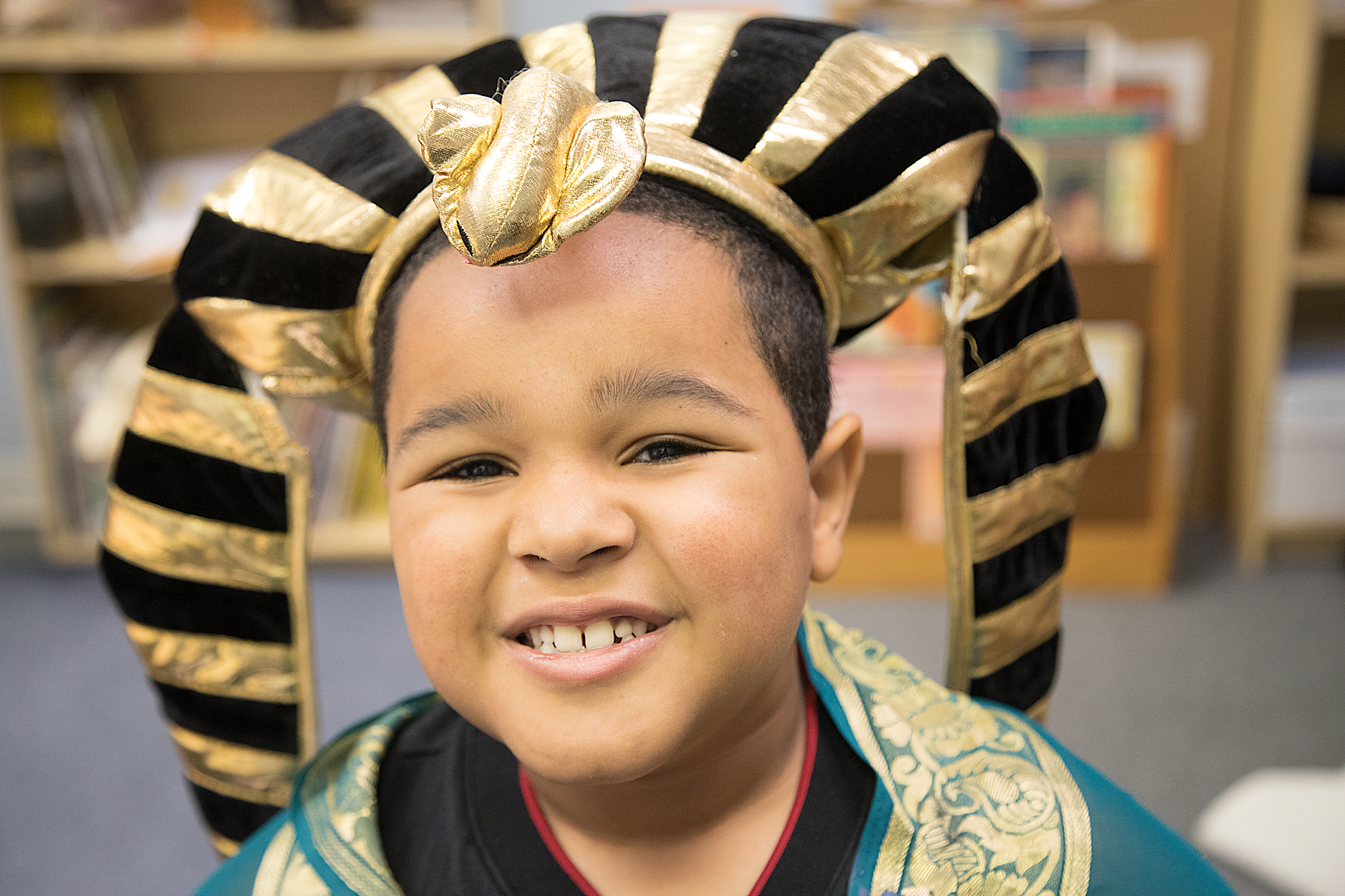 The academic objective of Knights & Ladies Club is to teach the history and culture of Europe during the Middle Ages. The students assume historical roles such as serf, peasant, merchant, page, squire, and knight to get a feel for the social system of feudalism. They learn about the 'tower of power' and how in feudalism one could not go up or down from their station in life. Born a serf, died a serf. Their club leader is Queen Eleanor of Aquitaine.

The structure of the class involves learning through drama, stories, music, and art.

The students in Knights & Ladies Club literally experience important events, lifestyle, and culture from the Middle Ages. Sophisticated material such as Beowulf and the Magna Carta are introduced to the students. Observing how castles were built from the Dark Ages through history to the late Middle Ages initiates an important appreciation for architecture.

They begin the year as serfs toiling in the garden, cleaning the castle, to becoming pages and learning the importance of games children played (chess, marbles) to squires where they learn about chivalry, how to polish armour, carve meat, sword fighting techniques, and finally, they become Knights and Dames during the knighting ceremony in the spring.

In Renaissance Club, students are led by Italian patroness of the arts, Lady Isabella D'Este. Each student assumes the identity of a famous and influential Italian Renaissance person (eg; Dante, Giotto, Brunelleschi, da Vinci, Michelangelo, Galileo) and spends the year learning about this amazing time in the history of the world.

Students learn about Florence, the Medici family, and 15th century Italy in addition to social structures and economic systems. They especially enjoy signature projects: putting on a puppet show of Dante's Inferno, building a dome to top the great cathedral, designing and racing flying machines in the style of da Vinci, sculpting Davids, learning the fine art of fresco, and more!

The class is held in a room designed to resemble an art studio in the Palazzo Medici and the students develop a life-long love of art and a deep appreciation of all of the academic principles involved, including scientific thought, literature, mathematic calculations, powers of observation, and making artistic choices. 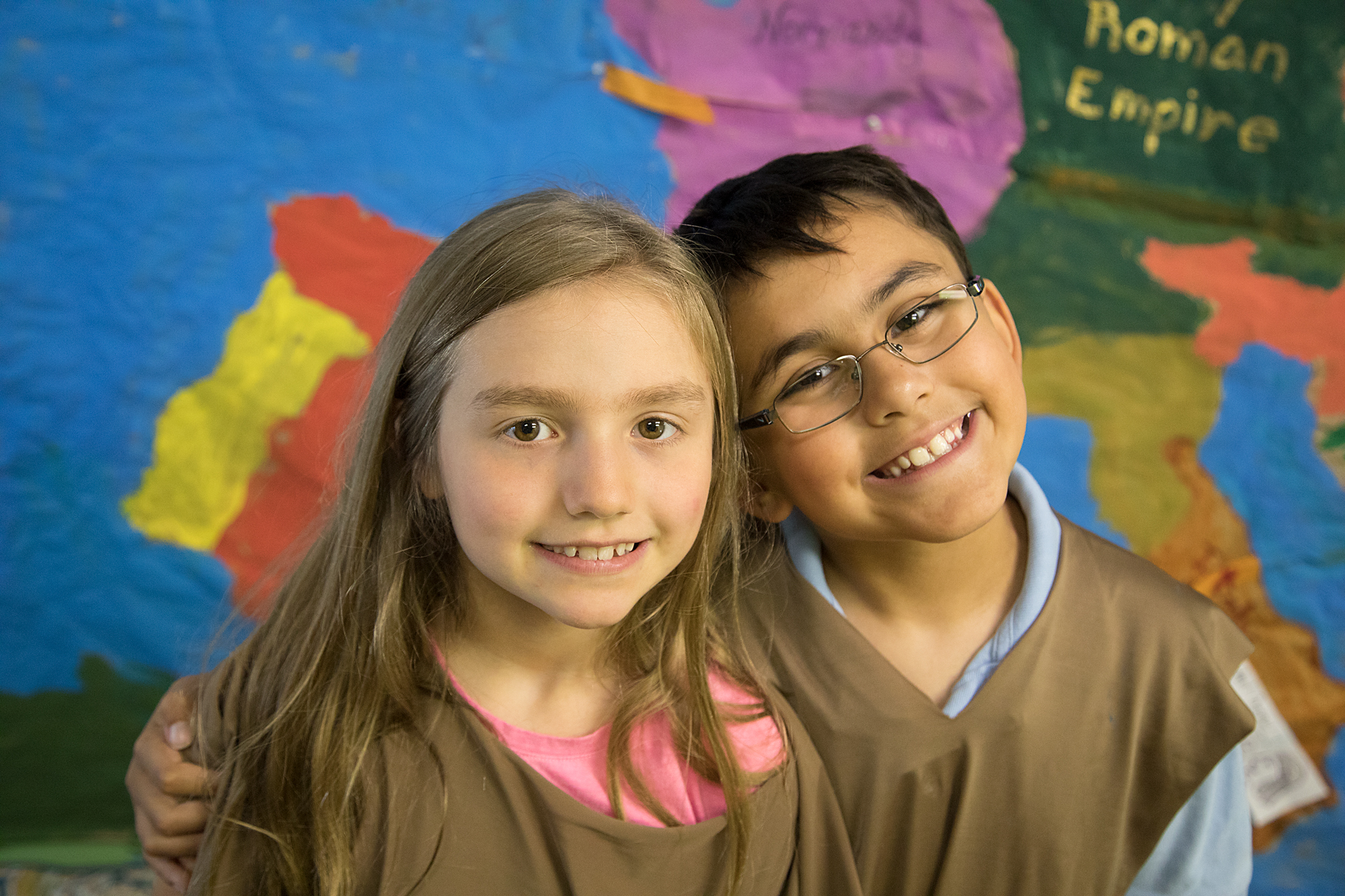 American Revolution Club is set in Colonial America.  The curriculum focuses on early American Settlements, building chronologically to the Declaration of Independence from England. Students become historical characters that represent the multiple experiences and perspectives of early American life present during the founding of the United States.

Students begin the year taking on characters such as the King and Queen of England, explorers, early settlers, and Native Americans. An examination of the pros and cons of exploration is conducted and students make educated decisions about whether or not to embark on this endeavor. After a long and difficult journey across the ocean the class explores the first English settlements, as well as the Native American tribes and the interactions between settlers and Indians.

As the year continues students learn about the development of the New England, Middle, and Southern Colonies. Students experience environmental adaptations, geographical challenges, crop production, trade, the need for organization and government, and the work of the time period such as candle making, weaving, and farming. During the second semester, students take on the characters of our nation’s founders in order to gain their independence from England by rebelling against unfair laws and organizing to ensure their success. Mini-reenactments of major events and the study of patriotism versus the loyalists all lead up to an in depth study of the Revolutionary War.

A multi-sensory approach, dramatization and hands-on activities encourage students to experience and feel the development of a new nation; the acquisition of independence and a democratic society; cause-effect relationships; and problem-solving skills as well as, the development of expressive language.

Museum Club reviews major periods of history beginning with the Ancient Civilizations and expanding into a study of comparative religion and the geographic origin of the five major religions: Islam, Judaism, Hinduism, Buddhism, and Christianity. The Club Leader is the Museum Director. The students are all employed by the Museum. Emphasis is placed on seeking out progress in government, architecture, agriculture, technology, and communications. The lifestyle of each period is examined by looking at arts and crafts, tools, inventions, religion, science, language, clothing, and housing. Replicas of artifacts from each period of history are made and displayed in a “museum.”  At the end of each unit of study, an exhibit “opening” is held with each curator speaking to visitors about the exhibit.

The multi-sensory approach and hands-on activities encourage a feeling for the development of civilization, the acquisition of classical knowledge, cause-effect relationships, and problem-solving skills as well as the development of expressive language. 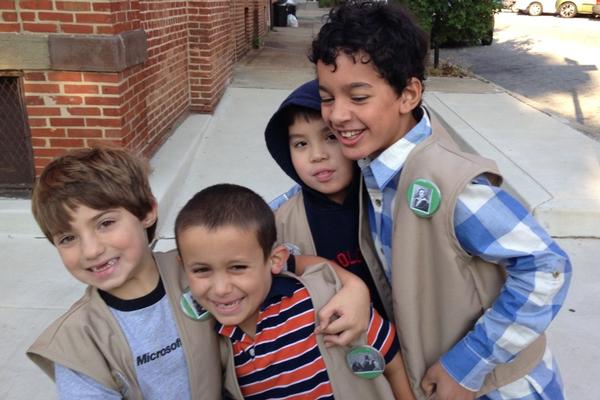 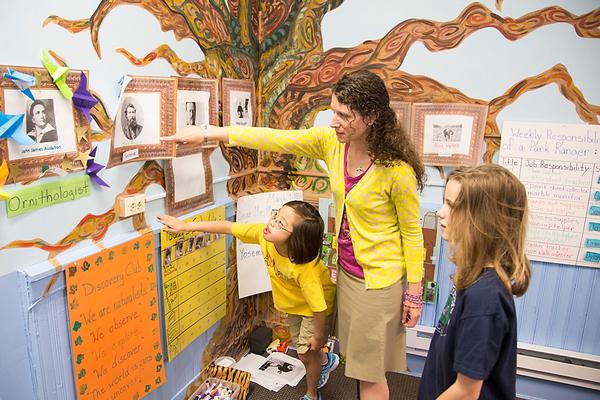 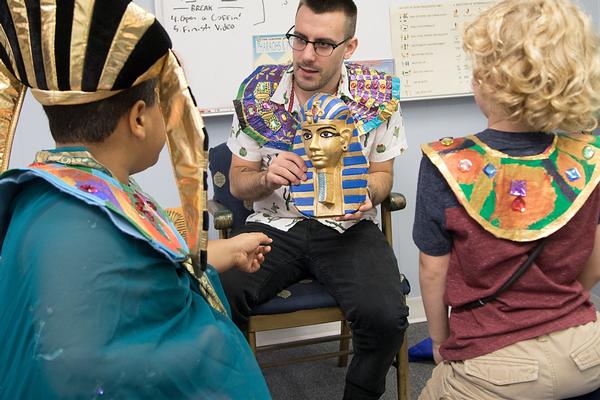 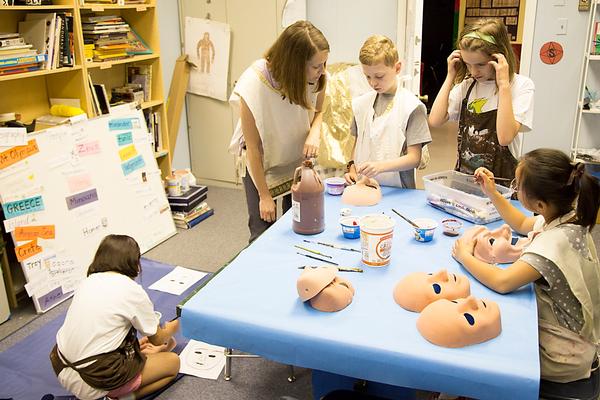 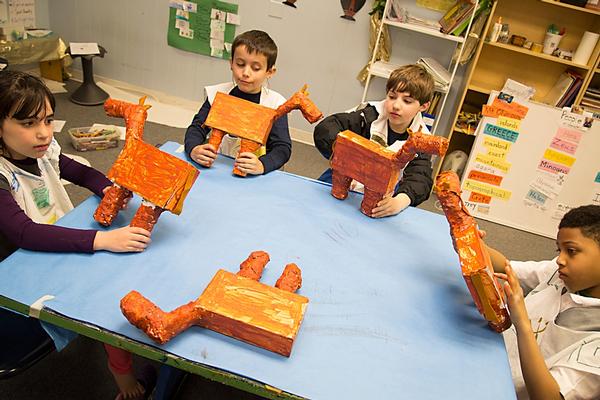 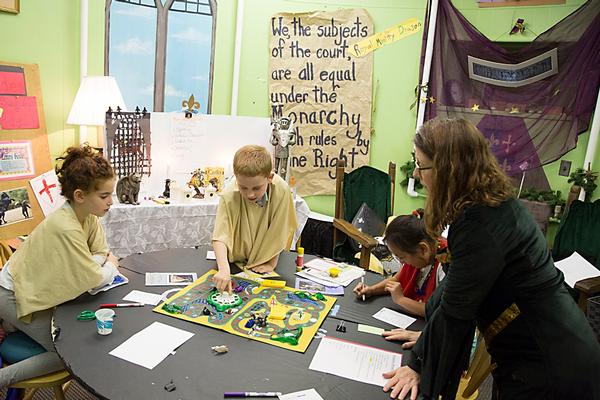 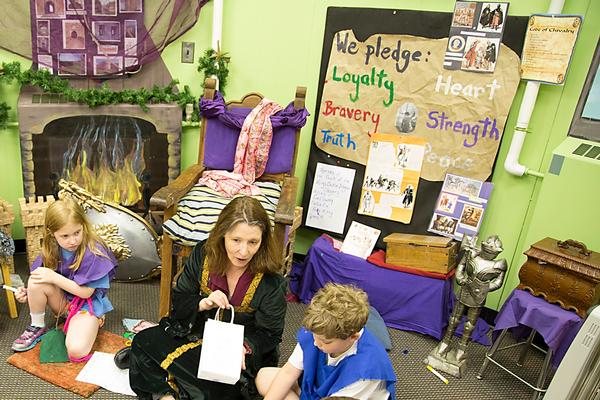 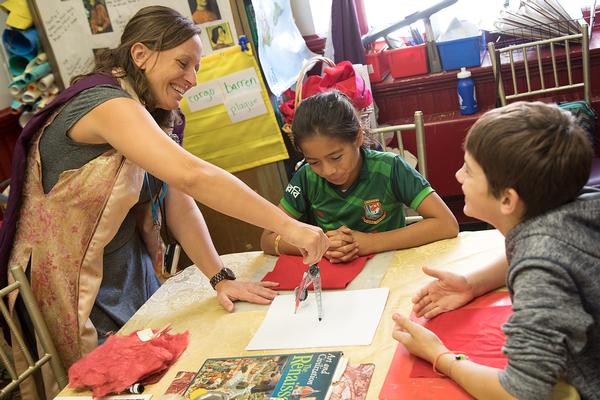 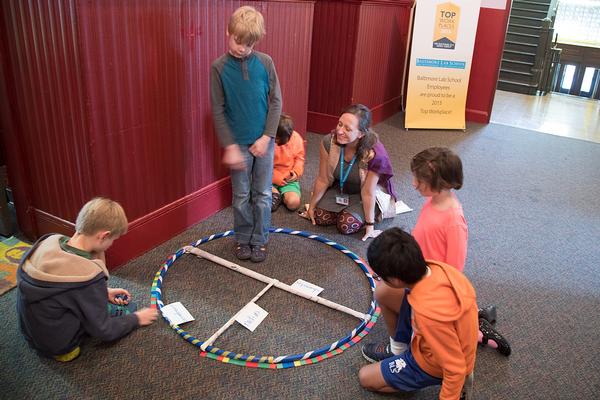 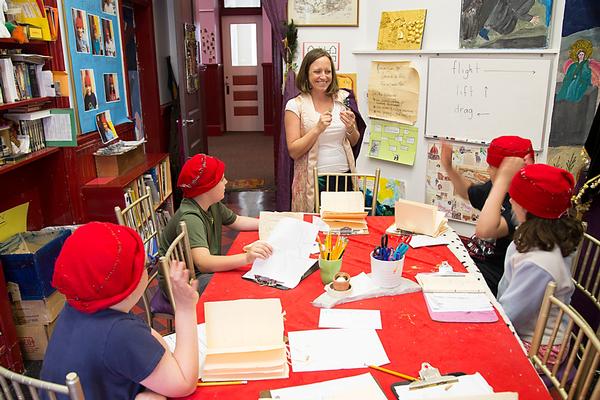 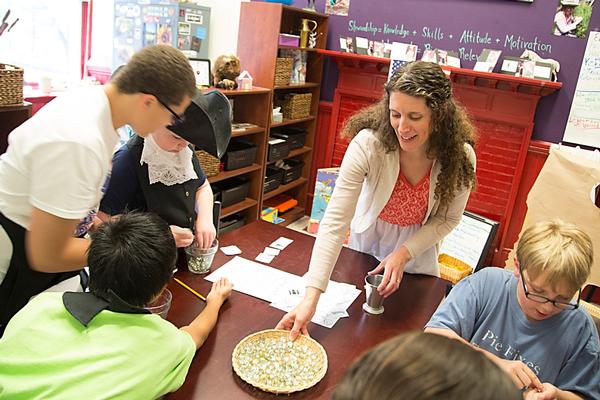 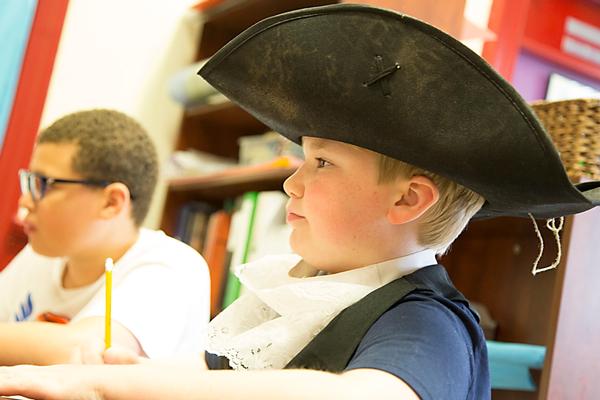 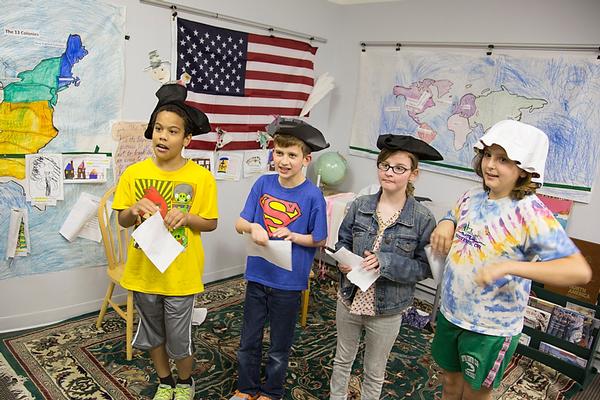 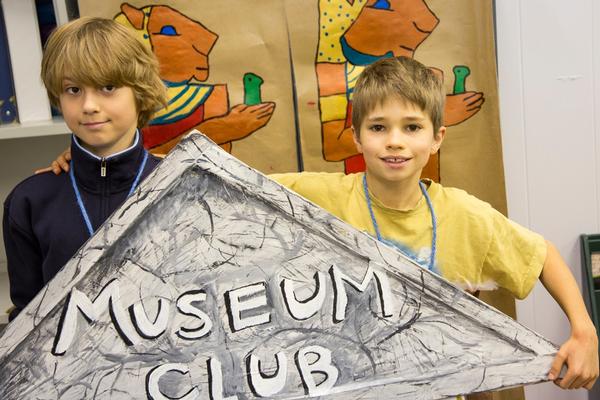 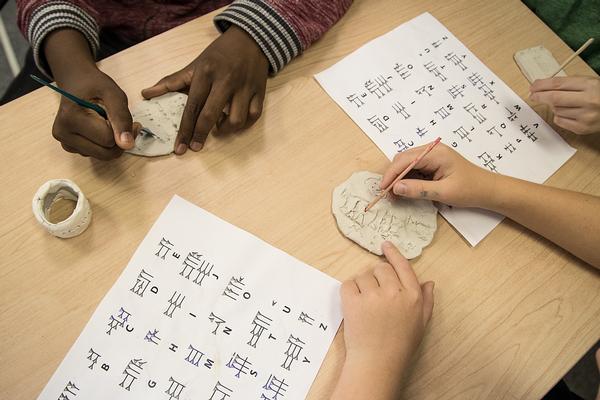